Committee on the International Slave Trade Issue, Congress of Vienna 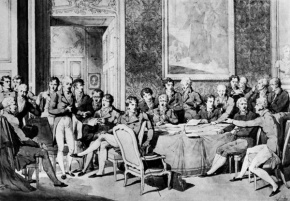 As agreed at the first Treaty of Paris in 1814, a congress of the Great Powers of Europe met at Vienna to settle the future boundaries of the continent. Almost every state in Europe was represented. In February 1815, the Congress condemned the Slave Trade as inconsistent with "principles of humanity and universal morality". However, many nations continued nonetheless. France, for example, continued human trafficking until 1848.