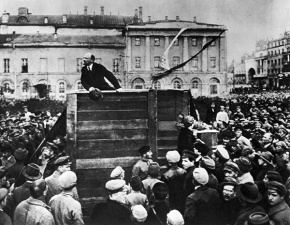 The Russian army suffered numerous defeats in World War I and were inadequately supplied with supplies. Food shortages hit Russian cities, giving rise to political unrest. In February (March in the Gregorian calendar) people in food queues in the St. Petersburg started a demonstration, and were soon joined by thousands of women textile workers, who walked out of their factories. The police lote control of the situation, and many of the military sent by the government to quell the crowd were also insurgents. Tsar Nicholas II was forced to abdicate, and his brother refused the crown. The Provisional Government was set up, led at first by Prince Lvov, and after him by Alexander Kernsky.

The Provisional Government was not an immediate success. They did not withdraw Russia from the war, wages fell by 50% and Russia’s national debt rose. Revolutionaries, notably Lenin, leader of the Bolshevik Party, returned from exile, and mass demonstrations of workers and soldiers demanded “all power to the soviets”. A period of repressions led to attacks on the ‘Pravda’ press offices, and the Provisional Government ordered Lenin’s arrest, forcing him into hiding.

Commander-in-Chief of the armed forces General Kornilov led an attempted coup in August. The Bolsheviks mobilised and were armed by the Provisional Government, and quelled the Kornilov revolt. Their popularity increased, and on the 25th October (7th November) the Bolsheviks took over major government facilities, stormed the Winter Palace, and overthrew the Provisional Government in a mostly bloodless revolution.

Direct consequences of the Bolshevik rise to power included the withdrawal of Russia from World War I, the nationalisation of all Russian banks, the confiscation of all Church property, the repudiation of foreign debts, the introduction of higher fixed wages and shorter working days, and the handover of control of the factories to the Soviets.