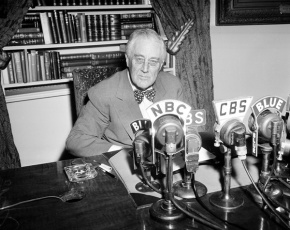 United States President Franklin D. Roosevelt, in a speech before the United States Congress, put forward the notion of "Four Freedoms" as rudimentary rights for all mankind: freedom of speech and religion; freedom from want and fear. Displaying a sense of liberal tolerance, these rights set the tone for the direction and progression of human rights law for the remainder of the century. The ?Four Freedoms? were best encapsulated in the Atlantic Charter, in which Franklin D. Roosevelt and British Prime Minister, Winston Churchill, stated their hope, "that all men in all the lands may live out their lives in freedom from want and fear", among other wishes. In this way, two of the main powers of the international sphere showed a heartfelt commitment to maintaining universal human rights, to each other and to the rest of the world.