From a Divided Country to a Unified Country

As the allied powers gathered at Potsdam in July of 1945 to negotiate the terms that would bring the Second World War to a close, Germany faced an uncertain future. Confronted with the failure of the Nazi regime and shouldering the responsibility for the years of war and genocide that had marked Europe and the world, Germany stood to be partitioned and to have its territory occupied by the powers that had put an end to the bloodshed. Over the next forty-four years, Germany would struggle to rebuild its identity and reconcile itself with its past whilst remaining a divided nation. Ideologically, politically and physically, the barriers that divided Germany over these years would shape the evolution of its post-war identity - an identity that, in 1989, would be given a peaceful revolutionary voice in the declaration of ?Ein Volk? and the fall of the Berlin Wall.

The building of the Berlin Wall on August 13th 1961 represented the culmination of over a decade of hardening relations between Allied occupied Germany and the territories of the Soviet Union. The first indication of the instability of relations between the East and the West and the genesis of the Cold War had come thirteen years earlier, when the success of the Berlin Blockade proved to the Soviet Union how limited their control was over the segregated zones of the city. August 1961 also saw the Wall claim its first victim ? 24-year-old Günter Litfin, shot dead by police whilst trying to cross the boundary.

Over the four decades of the Cold War, the physical division of the city of Berlin came to symbolise the diplomatic and political standoff between East and West. Over the twenty-five years that followed Kennedy?s visit to the city in 1963, the relationship between the Eastern German Democratic Republic and the Federal Republic of Germany of the West improved slowly. However, it was not until 1987, with President Reagan?s declaration of ?Mr. Gorbachev, tear down these walls?, that Western policies towards the Soviet Union began to bear fruit.

The reunification of Germany on October 3rd 1990 marked a new stage in the evolution of Germany?s national identity. It was one based upon repudiation of violence and oppression, conscious of the divisions wrought by the preceding decades, but also determined to move forward in unity.

"From a Divided Country to a Unified Country": 1945 - 1990 the Path to German Reunification

The War is Over 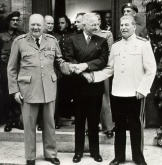 Potsdam Conference and the future of Germany

The Foundation of the Federal Republic of Germany

The foundation of the second German state, the German Democratic Republic

The DDR seals its western border 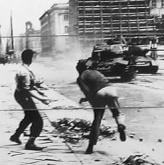 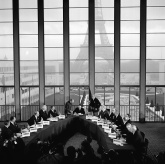 The signing of the Warsaw Pact

The establishment of the EEC

The Berlin Wall is built

The first victim of the Wall dies

Kennedy and his speech in Berlin

The Prague Spring Uprising is suppressed

FDR Chancellor makes a diplomatic visit to the DDR

Willy Brandt and the Kniefall

Hungary opens its border to Austria

GDR?s days are numbered as they grant exit visas

40 year anniversary of the DDR

The fall of the Berlin Wall

The making of the future at Hunting Lodge

The vote for reunification