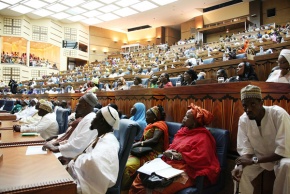 The Charter was drafted by the African Committee of Human and People?s Rights, and unanimously approved by the OAU. Designed to be a similar human rights instrument to those already existing in Europe and the Americas, the Charter recognises most universally accepted civil and political rights, economic, social and cultural rights, and group rights.

The Declaration on the Elimination of All Forms of Intolerance Based on Religion or Belief was adopted by the United Nations in 1981, after nearly 20 years of drafting. It was passed to further define international standards for religious freedom. The Declaration calls upon all States to recognise the right of all persons to worship or assemble in connection with a religion or belief, and to establish and maintain places for those purposes.